“Cristo Rey del Cubilete” in Guanajuato state is a massive statue of Christ that stands atop the highest mountain of the region.

The 22m statue marks the very centre of Mexico and its positioning 1,000m above the surrounding plains makes the statue a prominent landmark amidst the arid landscape. 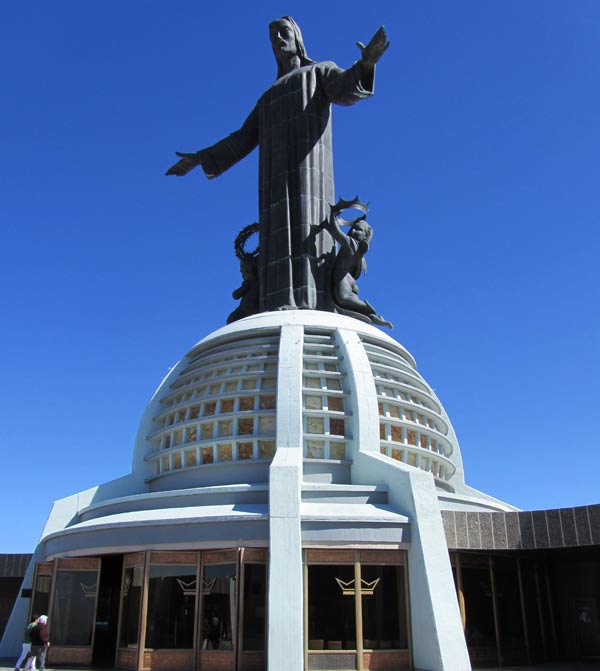 The “Cristo Rey” Statue in Guanajuato

“Cristo Rey” of Guanajuato is a recommended tourist attraction, offering visitors wonderful panoramic views over the region, a uniquely styled chapel and the opportunity to see the statue in close detail.

The statue of Christ the Redeemer King is an important pilgrimage destination as the statue stirs deep religious emotions with Mexican Catholics.

The original statue was destroyed during the 1920s Cristeros Wars that were was incited by the anti-Christian Mexican government.

This popularity sees busloads of tourists and pilgrims visiting every single day.

The statue of “Cristo Rey” is only 15km west of Guanajuato, but the journey involves a climb of almost 1,000m. This journey takes around 1 hour, but greatly depends on the traffic in the opposite direction.

There is a public bus service from Guanajuato and a single is Mex$20.00 pesos.

The statue of “Cristo Rey” faces the city of Leon, not the state capital of Guanajuato or the country's capital Mexico City. This strange direction was chosen as the religious centre of Guanajuato state is Leon (not the larger or more important Guanajuato) and the monument was funded by the diocese and cathedral and of Leon.

The present day bronze statue of “Cristo Rey” is the second re-incarnation of the monument. The original 2m stone statue was constructed in 1923, but was destroyed 3 years later in 1926 during the Cristeros Wars.

President Plutarco Elias Calles order the destruction of all religious monuments and the Cristo Rey was ruined by aerial bombardment in one segment of the protracted Mexican Revolution. The present-day bronze monument was co-funded by the government in a gesture of goodwill to the still powerful church.

The Guanajuato statue of “Cristo Rey” is the worldsworld’s second largest statue of Christ the King. Tthe largest is in Rio de Janeiro, Brazil.

The Mexican statue weighs 80 tones and stands at 22m, but the height is accentuated due to the positioning on top of the domed church andin the 2,000 meter,000-meter “Cerro del Cubilete” mountain.

The bronze statue was inaugurated in 1940 and was designed by the sculptor Fidias Elizondo and constructed by the architect Nicoláàs Mariscal Piiñna. The statue of “Cristo Rey”, Guanajuato depicts Christ with his arms extended and open with two angles flanking hHis sides. One angel holds the royal crown and the second carries the crown of thorns.

The “Cristo Rey del Cubilete” statue is a popular pilgrimage destination for Mexicans, though no holy apparition or miracle has ever occurred here.

Pilgrims perform acts of devotion and sacrifice in the hope that their prayers are answered and, pilgrims can be seen making the final sections of the accent on their knees or by crawling.