The statue of Christ Rey is located 15 km to the west of Guanajuato but the journey involves a climb of almost 1000m. As the statue and church are popular Mexican pilgrimage destinations the complex is served by three transport options each of which has it's own benefits.

The road from the base of the mountain to the statue of Christ Rey is along stone laid concrete roads that were deliberately designed to the bone crunching to limit the speed of the traffic and provide extra grip while breaking at the tight corners.

The the direct route by taxi takes approximately 45 min but can be significantly longer if stuck behind a coach or bus packed with pilgrims or traveling against the flow of traffic. This route provides fantastic views over the central Mexican plains.

The second route is longer, along sections of cobbled road and dirt tracks that lead between the La Valenciana Mine and the of Christ Rey. Due to the nature of the road it is only suitable for tourist 4x4 vehicles but the main draw of this route is the completely remoteness, with no other signs of life but the dust from the 4x4.Both routes are incredibly dusty and the main route is unbearable if stuck behind the last diesel belching buses or lorry.

Buses leave from the main bus station with a service every hour the journey is significantly longer and should only be considered by travellers on a very tight budget.

Tourist 4x4 and especially taxis may be difficult about timings of tours or very insistent on leaving the site at a particular time. There is a valid justification as parking for coaches is very limited and the entire top of the queue becomes gridlocked waiting for coaches to leave. The two possible outcomes are either the taxi is blocked in or an additional steep stepped climb is needed to get to the main entrance. 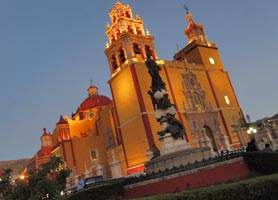 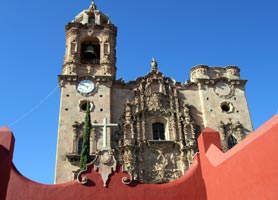 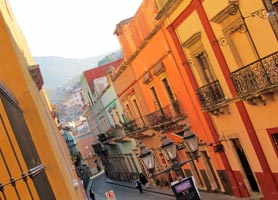 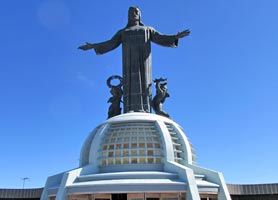 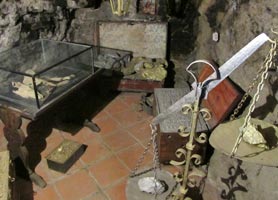