Of the 23 churches or religious buildings in the relatively small area of central Guanajuato the Nuestra Señora de Guanajuato or more simple the Guanajuato Basilica is both the most visually striking and historically important.

The exterior of the Guanajuato Basilica is painted a powerful shade of yellow with wine red detail and domed roof. 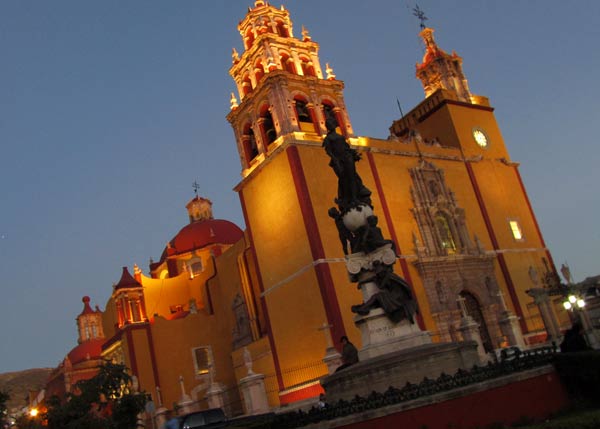 There are numerous other religious buildings in Guanajuato painted similar with this distinctive colour scheme but none are as impressive as the basilica.

The main portal is surrounded by a decorative pink sandstone formation of stepped layers with carvings of the saints.

The basilica was initially constructed in 1671 but was remodeled to demonstration of wealth commanded by the leading silver Baron's after the independence of Mexico from Spain.

Interior of the Guanajuato Basilica Mexico

Inside the Guanajuato Basilica is jewel incrusted image of the Virgin Mary which was supposedly hidden in a cave for over 800 years, initially hidden from the Moors during the invasions of Spain.

The sacred artifact was presented to the mining town Guanajuato in 1557 as a gift from King Philip II in recognition of the vast quantities of silver being produced for the Spanish monarchy. The date when the statue was inaugurated is celebrated within the city with religious processions lead by the statue on a bed of flowers, the inauguration is celebrated on the 9th of August.

The Basilica of Guanajuato was designed in the Mexican Baroque style, but over the course of the life of the church there has been major alterations and additions. The most notable is the clock tower added by the Count of Valenciana. The church was given the status of minor Basilica in 1696 and upgraded to full basilica status in 1957.